. Since I already knew the author Charles Wheelan from his awesome book Naked Economics: Undressing the Dismal Science (Fully Revised and Updated)

I went ahead and bought this one for my Kindle. Great decision – it is one of those books that is fun to read while also adding (hopefully) long-lasting value. To make it short: Business Analytics professionals should read Naked Statistics. We work with data on a daily basis and there is an increasing emphasis on Predictive Analytics. Professionals therefore have a growing need for a decent working knowledge of statistics.

Many people have a hard time with statistics. College and university courses usually throw around a wild mix of scary looking formulas containing lot’s of Greek symbols. It certainly took me a while to make sense of my professor’s scribble. As a result, lot’s of people develop a fear of of this subject. Naked Statistics, however, demonstrates that it is possible to teach a seemingly complex topic in a simple manner. Charles Wheelan provides a journey through some of the most important statistical concepts and he makes it fun and easy to understand.

Naked Statistics covers a broad range of the most fundamental statistical concepts such as median, standard deviation, probability, correlation, regression analysis, central limit theorem and hypothesis testing. Each concept is explained in simple terms. The author also uses a mix of fictitious stories (some of them are funny) and real-life examples to show how things work and why they are relevant. Math is kept to a bare minimum – you will only find a few formulas in the main text. Reading is easy and fun. I was surprised to find that I devoured many chapters late at night in bed (I don’t usually read business books that late).

is a great read. It provides you with a sound working knowledge of statistics and it actually motivates you to dig deeper (I pulled out one of old text books). For those people who know statistics, this book can help you brush up on some concepts. Analytics professionals might also want to recommend this read to colleagues who start working with predictive analytics and other advanced tools. Students should buy a copy before they attend statistics classes – they will certainly be able to grasp the more advanced subjects more easily. I wish I had had this book back at university. It would have saved me some sleepless nights. Two thumbs up – Charles Wheelan does strip the dread from the data.

Some of you might have noticed that the posting frequency on this blog has decreased a bit. I have been traveling more than ever before. This past Saturday, I returned from a 15 day business trip to San Francisco. As tough as traveling sometimes is, it does provide you with some quiet time for reading. And that’s exactly what I did on those 13 hour flights. Right before I left, Amazon.com had posted a number of fantastic new business books in their monthly 3.99 Kindle promotion section. There are a bunch of really good books this month. One stood out.

How Will You Measure Your Life?

“How will you measure your life” is a relatively new book by famous innovation expert Clayton Christensen. It is based on a speech he gave to the 2010 graduating class of Harvard Business School. This is not another business book. Instead, Christensen provides powerful and provocative ideas for finding meaning and happiness in our life. Sounds like a self-help book? Not at all. Christensen blends personal stories with deep business research. The combination of business ideas and personal life is what makes this book such an enjoyable and valuable read. Christensen looks at some of the more well-known theories such as Herzberg or the discovery-driven planning approach. He then applies those theories to our own personal life and derives some very interesting ideas and thoughts. As a business professional, I really enjoyed this combination and it left me thinking about my own career and personal life. The book is structured in three sections:

The book roped me in and I ended up reading it in an entire session. Anyone interested in business will most likely enjoy this read. Two thumbs up! The book is currently available for just USD 3.99 (Kindle version)

. Make sure to grab your copy before the offer expires.

Look out for some hopefully exciting posts in the next two weeks. I will be heading back to San Francisco next week to attend OSIsoft’s vCampus Live event. This technical conference focuses on developing powerful analytics applications with the OSIsoft PI server. I am especially excited about the opening day keynote: Stephen Few will be speaking. You will see some notes and photos on this blog soon.

Do you enjoy wasting time? I surely don’t and I do not have patience engaging in activities that do. Unfortunately, over the past few months I did witness several completely useless discussions about tools and their specific features and functions. So much wasted time and energy! While everybody focused on boasting & bitching, core issues were completely ignored. This is so wrong! But let’s back up for a second…

Back in February, my favorite camera manufacturer released a groundbreaking piece of equipment. The discussion forums and relevant blogs were going crazy for a while. People expressed their enthusiasm for the new features. However, the general tone in the discussion forums quickly turned sour. Photographers were lashing out at each other. It got really stupid (“Do you know how to count megapixels!”) and the discussions were far removed from the subject that should be at the core: photography. Photography is about taking great photos that touch people. It’s not about pixel peeping. One person made an especially smart comment: “Finally. This is the camera that provides me with endless freedom. All other cameras in the market have limited my creativity so far.” Oh well…..I am sure Ansel Adam would hold his belly laughing on the floor. His creativity was truly limited by his huge camera and the heavy stacks of film plates…..NOT!

There is a similar issue in business analytics. We sometimes spend too much time thinking and talking about the tools. Back in my Big 5 days, I sat with a client who was very dissatisfied with his BI tools from a certain vendor. He claimed that the lack of gauge charts amongst two other things explained the low user adoption. Guess what – the company bought a different tool but the dashboards still sucked. Why? They thought the tool would provide a miracle fix. All their discussions were focused on the tools and not the business process. I am still 100% sure that they could have built a highly valuable solution with their old software. Granted, it did not look sexy. But it was highly functional. Time for a reality check: High-pixelated garbage is still worse than a low-resolution masterpiece.

“Men have become the tools of their tools.” Henry David Thoreau

What’s the issue here? A ton of time is wasted discussing tools. The sad truth is that a new tool won’t guarantee success. Poor data sources, sloppy business processes or lack of user engagement are often counteracting the new benefits.  etc.. Better tools alone won’t create better output. It takes skills to put the tools to good use. A poorly composed photograph that was taken with an expensive camera is still a crappy picture. A poorly designed dashboard built with an expensive tool will collect dust. It’s that simple. Ansel Adams is one of the most admired photographers out there. He used ancient tools. Would he have been able to make even better photos with today’s equipment? Most likely, but his photographs are still absolutely amazing.

Work on your skills instead of wasting time.

Don’t get me wrong. There is a time when it is really important to think about your tools. But it can’t be the constant focus. It’s easy and comfortable to drool over or to bash a set of features and functions. It’s a lot harder to put these tools to their best use. Pixel and dashboard peeping is a form of laziness. It distracts us from what’s important. Instead, we should take the time to hone our skills: data modeling, dashboard design, visualization techniques, business trends, etc.. My prior client that I mentioned earlier never took the time to work on the inputs for the dashboards.

Well, I stopped reading the camera forums and have decided that the discussions won’t help me take better photographs. Instead, I have resorted to taking more photos, instead. Why don’t we take the time to sit down with our business partner and build a solid prototype? Why don’t we attend a training in report design? Why don’t we read an article about data visualization?

Reading business books is one of my favorite activities. You can probably imagine how delighted I was when I received a brand new Kindle Touch

as a present. This is the third Kindle I have owned since the first generation. And let me tell you – the Kindle Touch is awesome! Amazon managed to make a great product even better. It is so nice that I ended up leaving my beloved iPad at home during our last vacation. I have read over five books on the Kindle Touch in the past three weeks.

END_OF_DOCUMENT_TOKEN_TO_BE_REPLACED

A few days ago I bought and downloaded the ubiquitous eBook Zarrella’s Hierarchy of Contagiousness: The Science, Design, and Engineering of Contagious Ideas

. There is a lot of stuff about social media out there but I find that many materials are fuzzy and hype-oriented. Dan Zarrella’s book is definitely different and I think that Business Analytics professionals like you will enjoy the book.

Social media have changed the way we market to our customers. But reaching the right people is not all that easy as you have probably experienced. The basic idea of Zarrella’s book is to look at why certain ideas are contagious and what you can do to make sure that your message is heard in the various social media channels. Zarrella introduces a useful model (Zarrella’s Hierarchy) that helps explain how messages get spread through social media. It is a hierarchy of three criteria: 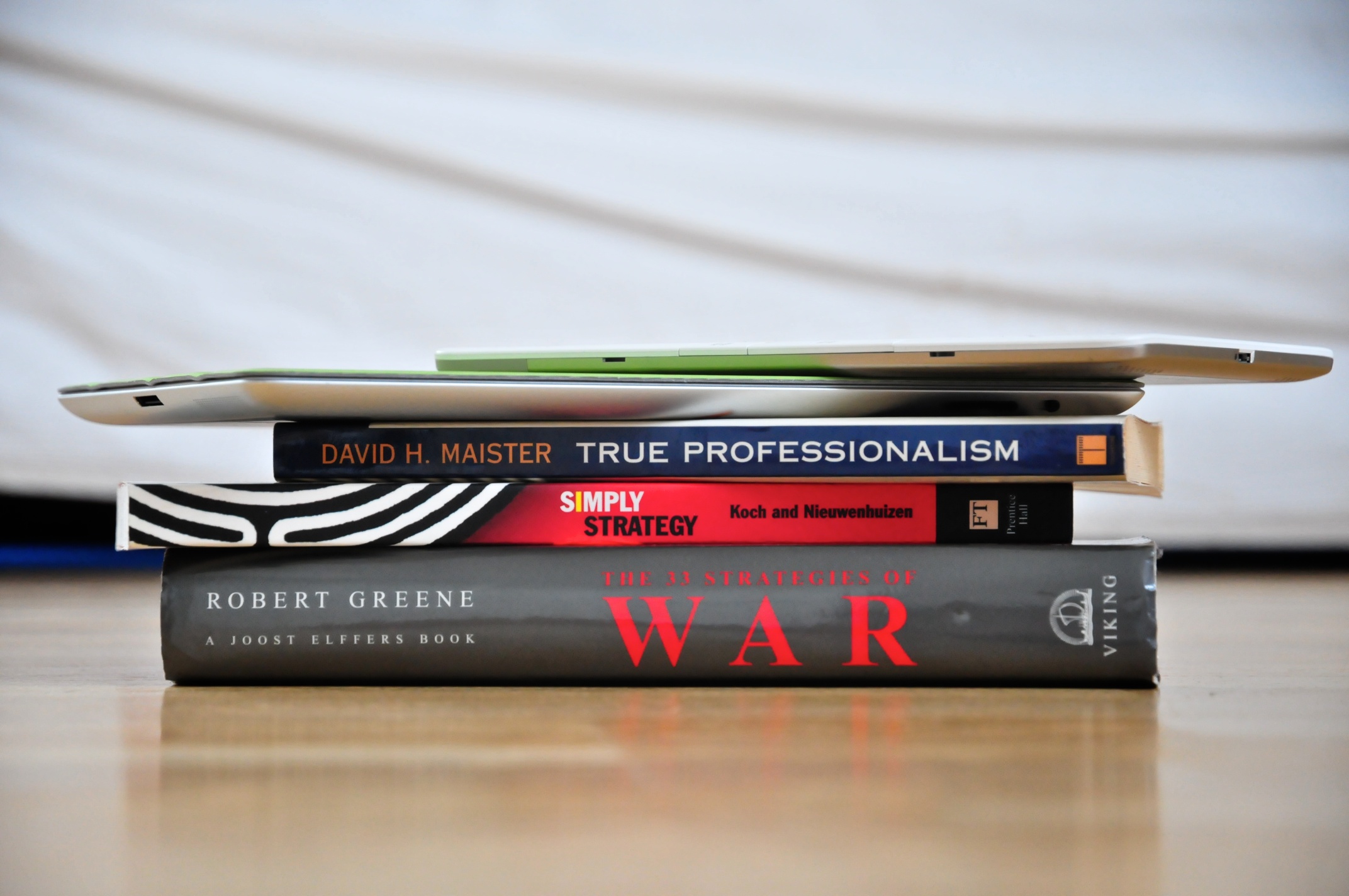 Do you love to read? I do. Business books are high up on my personal favorite list. Luckily, the Kindle and the iPad make it so super easy these days to find and enjoy new books. While I was returning home from a recent trip to London, the person sitting next to me on the plane asked me about some book recommendations. Why not share some ideas here on the blog? The following seven books belong to my current list of favorite books. All of these books have one thing in common: I keep coming back to them. The insights are either so profound and interesting or the book is that fun to read.

Have fun with this. If you want more ideas, feel free to check out my Amazon.com reading list as well. Happy Reading!

P.S.: Many people ask me why I have a Kindle and an iPad. Here is why.